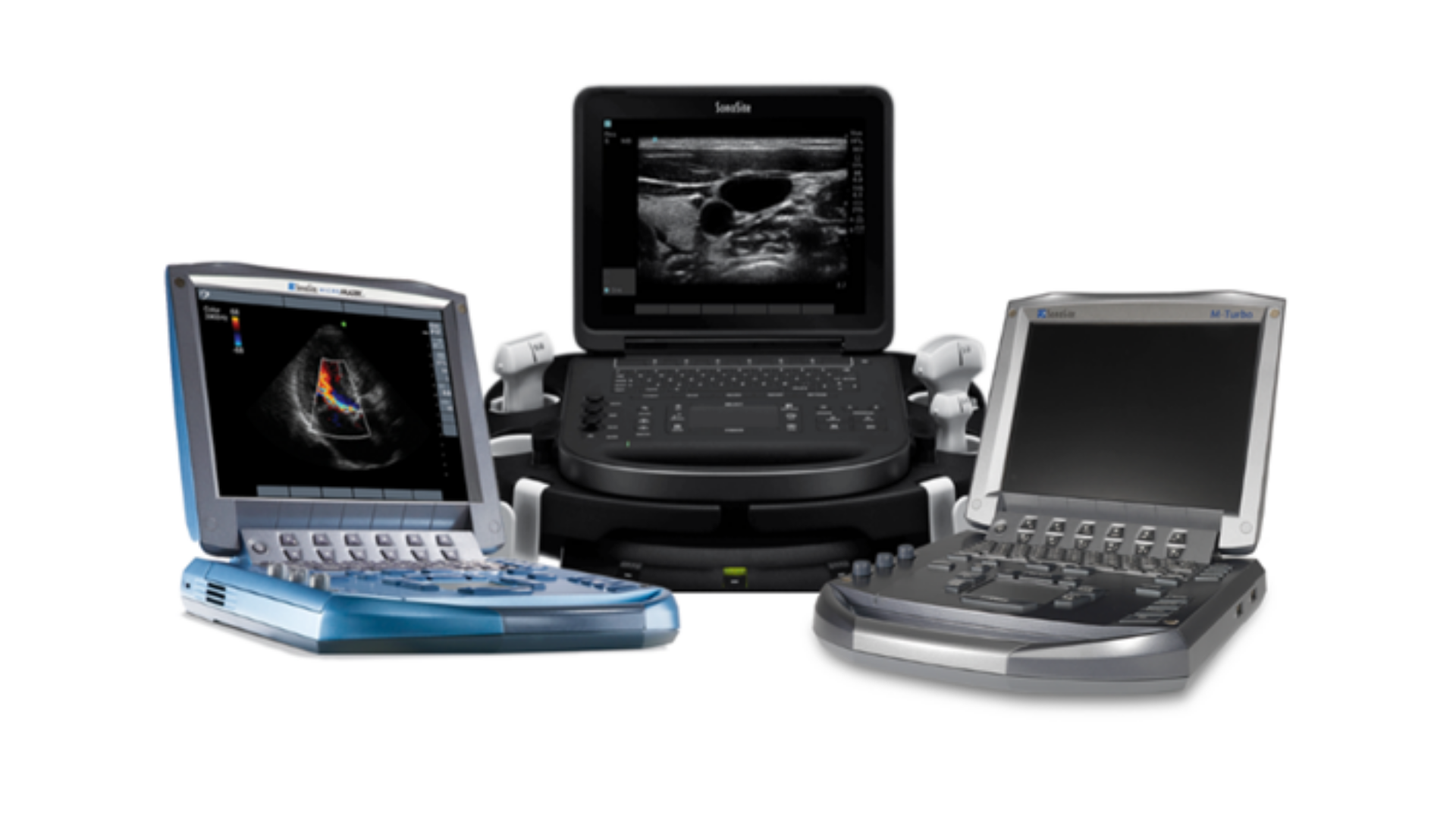 The following article is a paid advertisement by Conquest Imaging

Conquest Imaging shares what makes Sonosite's Portable Ultrasound Systems unique in the portable diagnostic ultrasound system market, and how to support, repair and maintain this system. Have a question for the expert or want to find out more after reading these tips? Fill out the form at the bottom of the page to ask Brandon Giger a question directly. 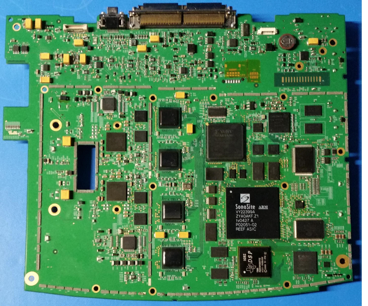 A quick YouTube search for “Sonosite Drop Test” will yield several videos of Sonosite portable systems being dropped from a height of 3 feet onto a concrete floor to demonstrate their durability. While I don’t recommend repeating this test with your own system, it certainly is an impressive feat that demonstrates why the designers had to take a very different approach to creating these systems.

One of the biggest differences is Sonosite’s approach to designing the system’s core electronics. With all of the acquisition front-end functions and back-end image processing functions implemented on a single PCB, it is one of the most unique and highly integrated ultrasound systems out there.

What do these differences mean for those responsible for supporting, maintaining and repairing these systems?

As well-designed and durable as Sonosite’s systems may be, they are still susceptible to a wide variety of faults and failures as many systems are. And, when they do finally break, they can be quite difficult to troubleshoot and repair.

Troubleshooting any diagnostic ultrasound system can be a daunting task. Having the ability to isolate and test a system’s front-end, back-end, power subsystem, user interface, etc. are invaluable tools for identifying the root cause of a system failure. Having the option to re-load software or easily replace suspect components can also greatly simplify the process of troubleshooting and repairing these systems.

Unfortunately, when it comes to troubleshooting and repairing Sonosite’s systems we have very few of these tools at our disposal, and few options exist for third-party support and repairs for owners of these systems.

Unlike the vast majority of older cart and portable ultrasound systems that I have encountered, Sonosite’s system firmware runs on a non-removable, non-volatile memory device (flash-based memory) located on the main PCB. There is no hard disk that can be replaced, reformatted or re-loaded with software meaning very few options exist for software related problems.

As for replacing suspect components, since almost all of the systems core electronics are on a single PCB, many of the issues you are likely to encounter will not be something that can be repaired outside of a qualified repair facility capable of component level repair of this main PCB.

Because of this, having a little knowledge of what kinds of faults, failures and error messages one might encounter with a Sonosite portable system can be very helpful in making informed decisions on supporting, maintaining, and repairing them.

What to do with a Sonosite System that is displaying a blue-screen error? 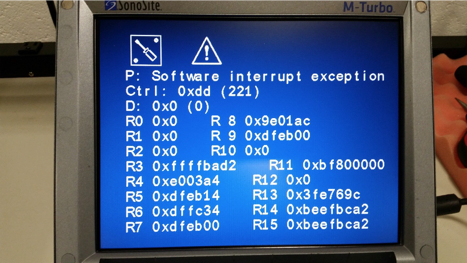 One of the most commonly encountered failure modes on Sonosite systems is the “infamous blue screen.” This blue screen filled with undecipherable codes is usually the sign of a serious system fault. With perhaps a few exceptions, these blue screen error codes typically indicate the failure of one or more components on the main PCB.

Systems that boot immediately to a blue screen, a common issue, will typically have issues relating to the back-end such as the CPU or system firmware.

Systems that only display a blue screen error message once a probe is attached, another common issue, will likely have damage to the system’s acquisition front-end electronics. Error codes such as those shown here are common problems relating to the system front-end.

On Sonosite portable systems, almost all of these types of problems will require component-level repair of the main PCBA.

Could any of these “blue screen” errors be caused by a probe?

While most blue screen error messages you may come across indicate some sort of fault or failure with the system’s main PCB, the root cause of some of these faults can be traced back to a defective transducer. Systems presenting certain blue screen errors only when a probe is attached will commonly have suffered damage which could have been caused by a faulty probe.

When encountering a system with this type of fault, it is extremely important to identify and quarantine any and all probes that have been used with the system until they can be tested and identified as faulty, or cleared for use. This can prevent other systems from suffering the same fate after a chance encounter with a faulty probe.

What are some of the other error messages I might encounter with a Sonosite Portable system, and what do they mean? 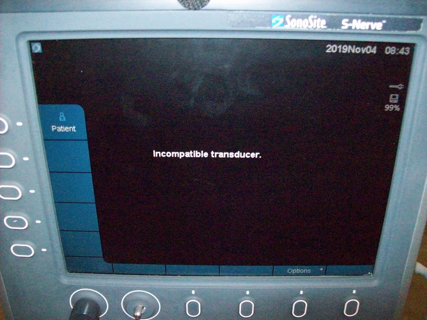 There are two primary reasons a system might display an “Incompatible Transducer” message. If you are connecting a particular model of probe to the system for the first time, there is a good chance that it simply is not supported by the system’s currently licensed transducer package. If this is the case, you will need to contact Sonosite for a transducer package upgrade in order to use this probe.

You may also see this message with a transducer that you have previously used with this system. If this occurs, you could have a damaged or dirty probe connector interface, a defective probe or possibly even damage to the system's main PCB. Testing the probe on another system can rule out the probe as the cause, and testing another probe on the system can confirm or rule out a problem internal to the system.

The connection protocol for Sonosites transducers is quite robust and includes measures to ensure that all of the pins of the connector are well seated and connected prior to attempting to enable the probe. This occasionally leads to seeing the 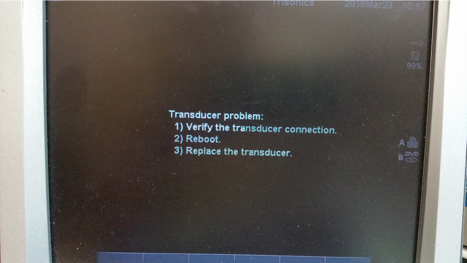 “Transducer Problem” message even with an otherwise perfectly good probe. Often, simply disconnecting and reconnecting the transducer does the trick, but if you have a probe that seems to do this frequently, your best bet is to connect the transducer prior to powering on the system. This should ensure that you do not get this message.

If a system gives this message persistently with one probe in particular but works fine with others, that probe has likely been damaged and will need to be repaired.

However, systems that give this message persistently with every probe that is connected most likely have damage to the probe connector on the system, or faulty components on the main PCB.

What causes dead spots in the image field – Probe or System? 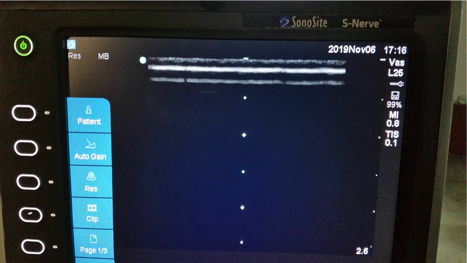 Dead spots or “drop-out” in the image field are commonly seen issues in diagnostic ultrasound that can be caused by both probes and systems. The image below shows an L25x probe with drop-out in two specific areas on the left and right sides of the image.

Often the culprit is the probe itself. Weak, dead or damaged elements in the array, broken conductors in the cable, damaged or corroded pins or pads on the connectors, all can produce drop-out in the image and could require repair to the probe.

Drop out can also be caused by the system itself, which would instead require repair of the system. The easiest way to determine whether the probe or system is the cause is to simply test the same probe on a different system, or test a different probe on the same system.

My system appears to power on but there is nothing on the display, what should I do?

Most of us have at some point powered on a laptop computer only to be greeted with a blank, black LCD screen. The fans are whirring, the indicator lights are on, but it appears that no one is home. A quick, easy way to troubleshoot this issue on a Sonosite system is to connect an external monitor. Using a cart or docking station (all S-Series systems have a docking station integrated into the system) connect an external DVI (Micromaxx, M-Turbo, S-Series, Edge and newer) or VGA (Titan) monitor to determine whether your system simply has a display issue, or has suffered a more serious internal failure.

Why does my system’s keyboard work intermittently, or fail to recognize keypresses on the keyboard unless I press down on it really hard? 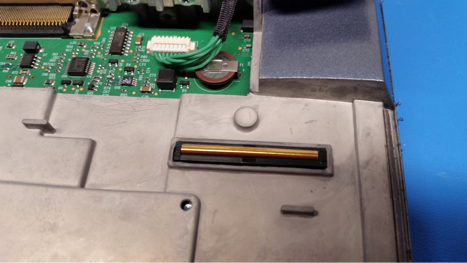 The keyboard assembly on many of Sonosite's popular older models (Titan, Micromaxx, M-Turbo, and Edge) is connected to the rest of the system through a piece of conductive elastomer. If this elastomer is not properly compressed against both the keyboard and the systems main PCB, the keyboard will not function properly. One of the most common causes of keyboard issues with these systems is simply loose screws. If the screws that hold the chassis together become loose, the keyboard no longer compresses the elastomer with enough force to make good, consistent contact with the system’s main PCBA. If the elastomer needs to be replaced, it will require complete disassembly of the system and therefore should not be attempted in the field.

What kind of preventative maintenance do Sonosite systems require?

While the manufacturer does not recommend periodic preventative maintenance for these systems (see service manual), a regular cleaning and inspection schedule for any and all systems is highly recommended. As with any electronic device that utilizes a cooling fan, dust accumulation in the fans and vents is inevitable and can eventually lead to problems. External connector ports such as USB, memory card interfaces (CF, SD) and power connectors will all accumulate dust, dirt and other contaminants that can cause issues or affect performance. While I don’t necessarily recommend removing any of the system’s covers or enclosures, regularly blowing out the cooling fan vents and any externally exposed connectors with compressed air from the outside will help to prevent issues in the long term.

Periodic preventative maintenance is also about more than just calibrating, adjusting and keeping the system clean. This is also an opportunity to inspect and identify any damage to the probe connector for things like bent or damaged pins, or oxidation.