The Continued Effects of COVID-19 on the Healthcare Industry

Its been six months since COVID-19 turned the healthcare industry upside down, what comes next? 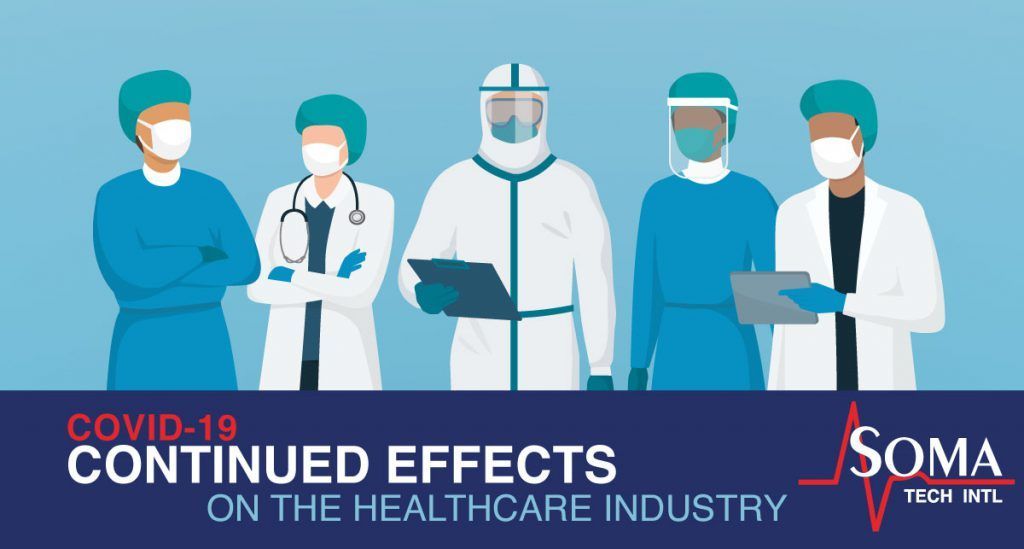 To recap:  As of September 9th, 6,330,316 people have been diagnosed with COVID-19 in the US according to Johns Hopkins and 189,733 have died.  During the initial surge of cases this spring, most hospitals and surgery centers were asked to postpone all nonessential procedures in order to reserve personal protective equipment (PPE) for the hardest hit hospitals which were, in many cases, running into extreme shortages of these vital supplies.  As a result, many surgery centers essentially shut down and the affected hospitals were deprived of a significant revenue stream.

As the above restrictions were lifted around the country in the late spring and early summer, some facilities saw a surge in procedures as patients attempted to reschedule their long postponed surgeries.  While this increased caseload may not have fully made up for what, in some locations, were several months without income, it certainly made a significant dent in their deficits.  Nevertheless, other types of providers, such as primary care practices, have seen a long-term significant drop in patient volumes as many people continue to put off routine exams and check-ups, presumably due to concerns about catching COVID-19.

Continued Effects on the Healthcare Industry

Unlike during previous recessions, healthcare has been hit hard, along with most other industries, during the first few months of the coronavirus pandemic.  As an example, during the worst of the Great Recession, while overall employment was down 5.7%, healthcare employment was up 1.8% year-over-year; however, during the worst of the current crisis, while overall employment fell 14% in April compared with 2019, the healthcare sector was down 7.8% at the same time.  The vast majority (~1 million) of the 1.5 million healthcare jobs lost between February and April were in outpatient settings such as dentist’s and physician’s offices, medical laboratories and outpatient/ambulatory health centers while home health, hospitals and nursing facilities were down a combined half a million jobs.  However, as the first round of restrictions were eased in May, these outpatient facilities began to hire workers back, led by dental offices who had hired back close to half the staff that were originally let go, while physician’s offices of various kinds hired back around 12% of their original workforce.  Unfortunately, though the large cuts seem to be over, nursing facilities and hospitals continued to lose staff (~1% each) into May.

Mirroring the jobs data, household spending on health services dropped precipitously between February and April with a decrease of 31% for dental services, 21% for physicians and 15% for hospitals.  While outpatient facilities were likely able to significantly decrease their costs by closing practices and furloughing staff during the early months of the pandemic, hospitals did not have that option and many were hit with the double whammy of decreased income coupled with the increased cost of caring for COVID patients whose median length of stay was between 9 and 13 days and who necessitated the acquisition of more ventilators, PPE and ICU beds.  And if all of the above was not bad enough for hospitals, the current high general unemployment rate may mean that more and more people will lose their connection to employer-provided insurance and be forced to either enroll in Medicaid or forgo insurance altogether, leading to lower or nonexistent reimbursement rates.

One concern experts have with the approach of fall is that while behavioral changes have been observed in the frequency of mask wearing and social distancing when regional death totals climb, once the spike in deaths begins to abate, many people return to less vigilant behavior; leading to a roller coaster effect where cases surge then abate somewhat only to surge again.  Additionally, the University of Washington’s Institute for Health Metrics and Evaluation’s (IHME) widely cited model predicts that cases will increase as the weather becomes colder in the temperate regions of the country.  While the model can’t explain why this is expected to be the case, a similar pattern has been observed in other human coronaviruses and the seasonal flu.  There are several theories as to why the virus will spread more easily during the fall and winter.  One is that people spend more time inside, where the virus spreads more easily, once the weather turns cold.  Likewise, it may simply be that the dryer winter air improves the stability of the virus or that one’s respiratory defenses are weakened by the dry air.

Whatever the reason for increased transmission during the fall and winter, there are three possible tracks the US caseload could progress down over the next three months.  In the most optimistic of these situations, with the near universal adoption of masks and social distancing in public spaces throughout the country, the IHME model predicts an additional 200,00 new daily infections by December 1st, only slightly higher than the current level of approximately 150,000 new cases each day, with a total of around 211,000 US deaths.  If, in addition to behavior changes, an anti-viral medication is introduced which reduces mortality amongst the elderly to the level of influenza, an effective vaccine is made available by January 1st and 60% of the public is vaccinated by mid-summer 2021, at-risk members of the community will likely feel safe to once again begin using the healthcare system near their pre-pandemic levels.  This combination will bring the nationwide healthcare system back to pre-pandemic caseloads, including outpatient procedures, by the middle of next summer.  Nevertheless, even in this best case scenario many financially struggling hospitals and clinics will either close or merge with deeper-pocketed institutions, accelerating the market consolidation that has been under way for the past several years.

On the other hand, should  the country prioritize returning to normal as quickly as possible, IHME predicts that the US will see more than one million new  infections every day and more than 360,000 deaths before the end of the year.   In this worst case scenario, mask wearing and social distancing are never implemented or enforced in the majority of the country and those places that have pushed infection rates down see resurgences either due to travel, complacency or fatigue with maintaining vigilance.  Additionally, no anti-viral medications or effective vaccines become available.  As a result, healthcare resources are forced to be focused almost exclusively on treating COVID-19 and most people continue to avoid visiting providers unless absolutely necessary.  In this situation, many providers, practices and health networks will be forced to declare bankruptcy, leaving many regions with suboptimal care, or none at all, without billions of dollars of additional government support.

Finally, if we stay on our present trajectory of behavioral changes in certain areas of the country but not others, the same model predicts we will reach near 300,000 new daily cases by December 1 with a total of around 317,000 deaths by that time.  If, along with these regional variations in behavioral change, an effective anti-viral medication becomes available over the winter which reduces health risks for those with underlying conditions and a safe vaccine which is as effective as the flu vaccine also reaches the market though only half the country decides to be vaccinated over the next six months ongoing coronavirus effects will vary significantly from place to place.  While some areas may be able to approximate the best case scenario due to buy-in to mask wearing and avoiding large crowds; enough so that vulnerable groups generally feel safe to use health services.  Nevertheless, new outbreaks will remain a constant threat.  Unfortunately, there may be regions with low behavioral modification and vaccination rates which end up more closely approximating the doomsday scenario.  There will also be still more areas that are moderately more successful and some, though not all, vulnerable groups feel safe enough to visit their care providers.  With this patchwork of responses, some regions travel down the consolidation path so that there may be fewer choices for patients but no gaping holes, whereas other regions will see significant downsizing and be dependent on government aid.

The coronavirus pandemic has resulted in a unique recession, one that it has affected the healthcare industry nearly as much as the rest of the economy.  While many outpatient providers are beginning to re-staff their facilities, overall consumer demand for health-related services is down significantly compared with 2019.  As a result, depending greatly on local adherence to behavioral virus containment strategies, different regions are likely to be disrupted more than others, though all are likely to end up somewhere on the continuum from a best case of increasing consolidation to outright bankruptcies or closures, barring further government funding, on the other end.  However the next several months to a year play out, emerging expert opinion suggests that the US healthcare system will not look the same as it did a mere nine months ago.