The following article is a paid advertisement by Innovatus Imaging

How do Mechanical 3D probes work?

Mechanically acquiring a 3D image requires that the acoustic array be oscillated back and forth, while multiple single images (or slices) are acquired by the scanner. The multiple images are then integrated with one another and assembled to render the 3D image. A lot of technology is required to make this happen. The probe as well as the scanner require additional electro-mechanics. Within the probe, the array is mounted to a plastic assembly that allows it to pivot on metal hinge points (details important later). A motor and push/pull mechanism oscillate the array, while sensors determine the motor’s speed and position. The entire upper half of the probe’s electro-mechanics are encased within an oil-filled bladder to allow for lubrication and acoustic coupling. On top of the probe is a soft rubber dome, which acts as the top of the oil bladder, and is the area that contacts the patient. The scanner also requires additional complexity. There’s usually a dedicated motor control PCB and additional power requirements to manage the probe’s electro-mechanics.

Why do mechanical 3D probes seem to have a high failure rate?

While image dropout and mechanical damage are common to all probe types, they may actually be more prevalent with mechanical 3D probes. The added technology within a mechanical 3D probe not only increases its size but can almost double its weight when compared to its 2D counterpart (GE RIC5-9-D versus GE IC5-9-D). It also introduces additional points of failure. Like all mechanical components, those inside 3D probes are subject to wear. Combining this with any small amount of accidental trauma can introduce a variety of new problems.

What is the most common type of problem with mechanical 3D probes?

A common problem is deterioration of or damage to the internal seals on the oil bladder, which results in an internal leak. This usually begins to present itself as air bubbles casting shadows in the image (that move based on the probe’s position or orientation) but can progress, depending upon severity, to oil draining from the probe housing. The same problem can occur externally to the dome. We’ve seen everything from small punctures and slices to the entire dome itself missing. Although its possible for chemicals to damage the seal between the dome and probe housing, most failures are a result of trauma or improper / unqualified adhesives used to install or repair.

How does Innovatus address this failure?

Innovatus’ approach to addressing the above failure is unique in the industry, and it’s one of the reasons why we are able to offer a 6-month warranty period resulting in extremely negligible failure rates. Any time a mechanical 3D probe undergoes an invasive repair at Innovatus, the entire fluidics system is rebuilt. The oil is drained, cleaned, triple-filtered, and degassed over a period of days. The existing bladder and seals are removed, discarded, and replaced with new components. Finally, the oil is replaced using qualified materials, proprietary tooling and processes, and the dome replaced. It’s a time-consuming process, but it’s the only manner in which performance and longevity can be restored. Anything less might result in latent failures, premature leaks, and the re-appearance of bubbles in the oil resulting in image artifacts.

What is another type of failure with mechanical 3D probes?

When a mechanical 3D probe is plugged into a scanner and selected by the user, the probe undergoes an initialization process. The scanner attempts to initialize the probe’s electro-mechanics, determine the motor’s position, and exercise its range of motion. If any of these items aren’t within the acceptable range, the scanner displays an error message. A common error when using a Philips 3D9-3v is “Error 30”. On GE probes (RICs, RABs, etc.), the common error is “MotCntl: No Reference Position Signal”. Both error messages instruct users to disconnect/reconnect t 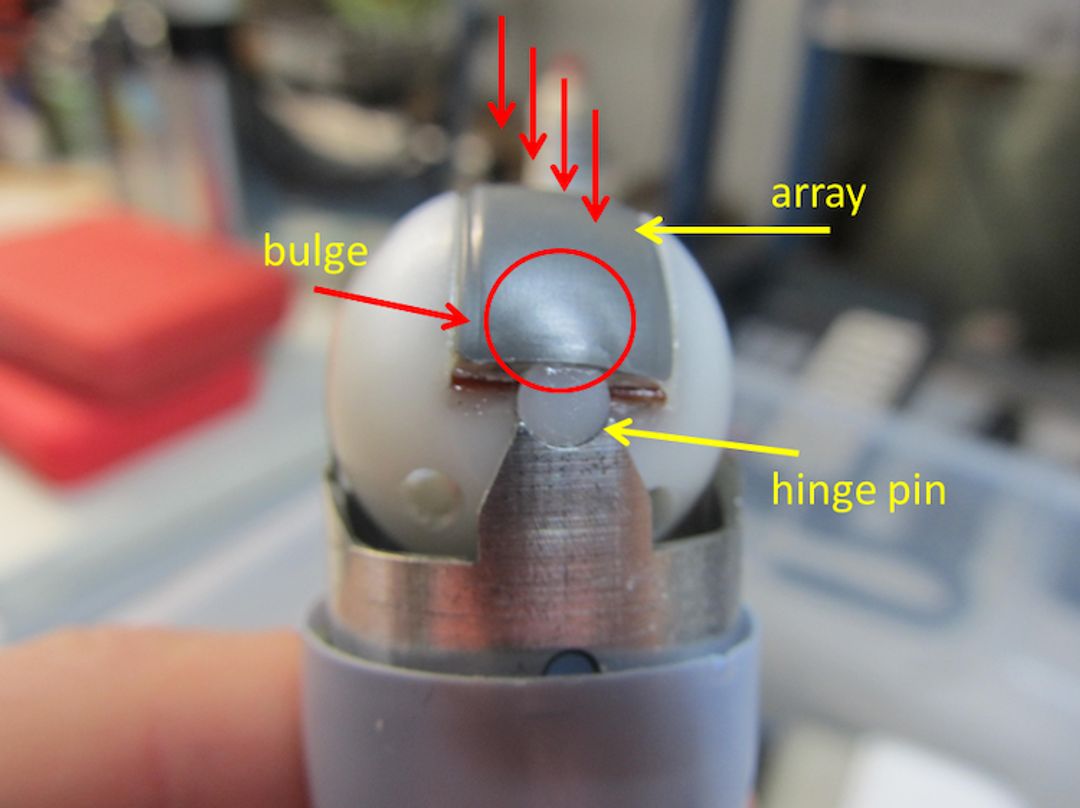 he probe to reinitialize the electro-mechanics.

What causes this type of failure?

There are instances when sensors and electronics fail, but the root cause of most of these errors are due to user induced problems. The most frequent cause is trauma to the top of the probe. As mentioned above and shown here, the array is mounted to a plastic assembly that oscillates on metal pivot points. An impact to the top of the probe can sheer-off the plastic hinge pins or jam the mechanics. The result can be decreased range of motion, no oscillation whatsoever, or intermittent operation depending upon severity. In some instances, an error is displayed immediately, other times the probe vibrates or works intermittently. Other causes for these errors are gross fluid invasion short circuiting the probe’s electro-mechanics or intermittent wiring in the cable harness.

Can you help our readers troubleshoot this problem?

The first step in any troubleshooting tree should be a thorough visual inspection. Starting at the top of the probe, look for the appearance of scuffs, dents, or impact marks to the dome or probe housing. These would be strong indicators of internal mechanical damage. The dome should appear uniform in shape. Any bulges or malformations are indications of internal damage, such as the array becoming unseated from its pivot points. On the probe housing sections, examine all joints where the various sections meet. There should be no oily sheen or residue, and by no means any fluid, oil or otherwise, leaking from the housing.

In the field, a good way to assess mechanical performance is to 1) initialize the probe on the scanner, 2) place the scanner in continuous 3D acquisition mode, and 3) apply very gentle pressure to the top of the dome using the palm of your hand. With gentle pressure applied to the dome, no error message should be present. If a mechanical failure exists, or if excessive pressure is applied to the dome, it may hinder the probe’s operation and induce an error. You should also wiggle the cable through its entire length inspecting for any intermittencies.

Innovatus Imaging supports the most popular 3D imaging probe models, whether mechanical or matrix technology. Multiple models are fully repairable, meaning that you’re not presented with costly options for replacement…Just cost-effective repair solutions. For more information about probe repair and our capabilities, please reach out to Ted Lucidi at TedL@innovatusimaging.com or visit www.innovatusimaging.com/ultrasound 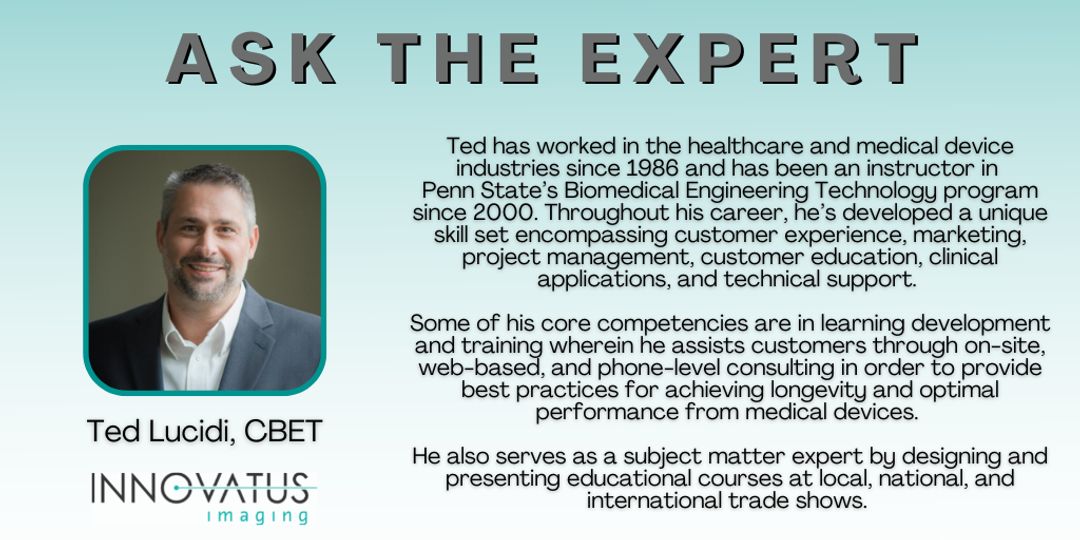