Navy Medicine and Readiness Training Center San Diegos Diversity Committee hosted a Native American Indian Heritage Month event to recognize and honor the contributions and service of Native Americans who have served and continue to serve in the Armed Forces of the United States, Nov. 22.

Navy Medicine and Readiness Training Center San Diego’s Diversity Committee hosted a Native American Indian Heritage Month event to recognize and honor the contributions and service of Native Americans who have served and continue to serve in the Armed Forces of the United States, Nov. 22. 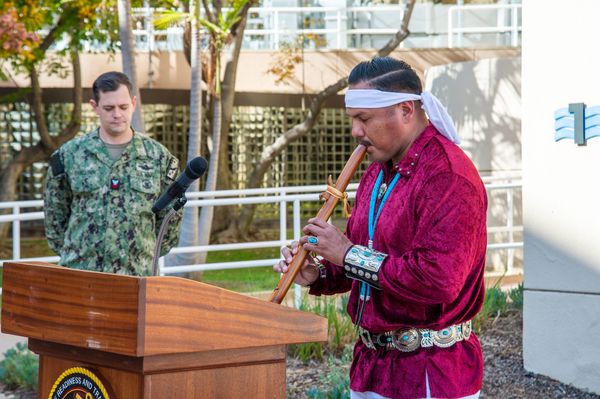 This year’s theme is celebrating: Respect, Culture and Education.

“It is an honor to celebrate my Native American Indian heritage with my fellow Navy tribesmen,” said Hospital Corpsman 1st Class Isiah Hadley, biomedical equipment technician. “The ethos of a warfighter mentality is rooted in my DNA, and to be in a position where I, and other Native Americans, contribute to our national security and prosperity of our nation is an honor and a responsibility that we take seriously as Native Americans.”

According to the U.S. Department of the Interior, American Indians have historically the highest record of military service per capita when compared to other ethnic groups. The reasons are deeply rooted in traditional cultural values that drive them to serve their country. These include a proud warrior tradition, best exemplified by the following qualities said to be inherent to most, if not all, Native American societies: strength, honor, pride, devotion, and wisdom. These qualities closely correlate with military tradition.

“I was impressed and humbled by the large turn our of supporters that we had today,” expressed Hadley. “With Thanksgiving taking place this week, I am grateful for so many things — one in particular — is the inclusion of all of the amazing and diverse segments of our population in our military that makes us into the most lethal fighting force ever seen to mankind.”

The observation of National American Indian Heritage Month has its roots in Public Law 99-471. Over several years the observation was moved to different months but in 1990 Public Law 101-343 set the month-long observance in November.